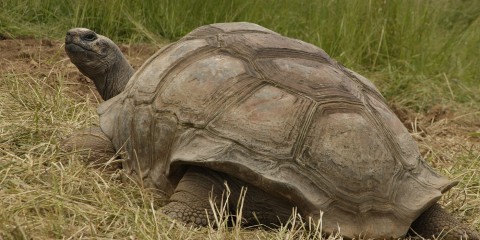 Physical Description: Aldabra tortoises' carapace (or upper shell) has a small neck plate that is usually visible, a feature absent in other species of giant tortoises. The males have a concave plastron (belly shell) that aids in mating. They are dark gray to black in color with a highly domed, thick carapace. They have long necks, which helps with food gathering. The hind legs are cylindrical and columnar like those of an elephant; thick, often bony scales cover them. The toes are short and two-jointed. The head is relatively small, pointed and covered by scales. A rare subspecies of Aldabra tortoise has been discovered in approximately ten zoos around the United States. The Aldabra tortoises at the Reptile Discovery Center have not yet been DNA tested to determine if they fall under this category
Size: Aldabras are one of the world's largest land tortoises. Males are considerably larger than females and have longer, thicker tails. The male's carapace length can measure 4 feet (1.22 meters) and they can weigh up to 550 pounds (250 kilograms). The female's carapace can measure 3 feet (91 centimeters) and can weigh 350 pounds (159 kilograms). An Aldabra tortoise weighing 672 pounds (305 kilograms) is the world's largest free-roaming tortoise ever recorded.
Native Habitat: They are found on Aldabra Island, one of the Seychelles northeast of Madagascar in the Indian Ocean. They were apparently introduced to Mauritius and Reunion Islands. Aldabra Island is a coral atoll bordered by jagged limestone and small beaches and encloses a large mangrove-bordered lagoon. The tortoises live in habitats such as scrub, mangrove swamp and coastal dunes. The largest concentration of tortoises is found in the grasslands called platins.
Food/Eating Habits: This tortoise is the largest animal on the Aldabra Island atoll. It fills a similar role to the one occupied by elephants in Africa and Asia. As with elephants, they are the main consumers of vegetation and will noticeably alter the habitat during their search for food. Tortoises have been known to knock over small trees and shrubs to obtain nutritious leaves. Seeds pass through the tortoise's digestive tract and eventually become food for many other species. Aldabra tortoises are able to go without food or water for long periods. They are grazers and browsers, feeding mainly on grasses and woody plants. However, they will eat meat when it is available and possibly even eat the carcasses of dead tortoises. They may also eat feces.

Social Structure: Aldabras are one of the more social tortoise species. Males will fight with one another for breeding rights and territory. Aldabra tortoises are easily domesticated and can learn to identify their keepers in a short time.

Reproduction and Development: The breeding season extends from February to May; females carry the eggs for about ten weeks, after which period they are buried in the ground. Clutch size is nine to 25 eggs the size of tennis balls. Typically, only three to five viable young are produced from a clutch. In high-density populations, female Aldabras may only lay four to five eggs every few years, whereas in low-density populations they may lay several clutches a year. Incubation is about four months. Females may nest twice in one season. In courting, the male batters his shell against the female a dozen or more times. The male makes a deep, trumpeting call when mating. Growth continues for life.
Sleep Habits: These tortoises will wallow in mud to protect themselves against mosquitoes. Giant tortoises will sleep an average of 18 hours in a 24-hour period, although this amount varies greatly among individuals.
Lifespan: They can reach ages of more than 100 years. It is believed that tortoises are the longest lived of all animals although is hard to prove because they have outlived the scientists who were studying them, and proper records were not kept. The Aldabra tortoises on exhibit at the Smithsonian's National Zoo are about 80 years old. This is a guess because they arrived at the Zoo as adults. One pair arrived in 1956 and the second in 1976.