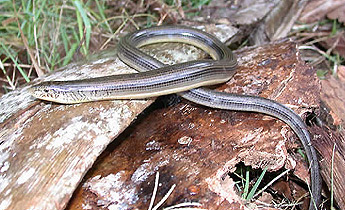 Description: 18 - 43 in (46 - 108 cm). Glass lizards are long, slender, legless lizards that superficially resemble snakes. They differ from snakes, though, in that they have moveable eyelids, external ear openings, and inflexible jaws. The eastern glass lizard is the longest and heaviest glass lizard in our region and is generally light brown or yellowish to greenish in coloration. This species is best distinguished from other glass lizards by the absence of a dark dorsal stripe or dark markings below the lateral groove and the presence of several vertical whitish bars just behind the head. Older individuals are less boldly patterned than younger individuals, often developing a greenish or speckled coloration.

Range and Habitat: Eastern glass lizards are found throughout the southern and eastern portions of Georgia and South Carolina but are most common in sandy areas of the Coastal Plain. Although these lizards may be found in a variety of habitats they are most common in flatwoods and around wetlands in sandy habitats. Additionally, eastern glass lizards are very common in coastal dune habitats and are sometimes even found beneath debris at the tide line.

Habits: Glass lizards forage actively by day in open habitats but are commonly found taking refuge beneath boards and other debris. When seized, glass lizards commonly break off all or part of their tail (which makes up more than half of their total length) and will later regrow. With the predator distracted by the wriggling tail, the lizard is free to escape.

Prey: Glass lizards eat a wide variety of insects, spiders, and other invertebrates as well as small reptiles and probably young rodents.

Reproduction: In early summer, female glass lizards lay several eggs under a log, board, or other cover object. The female apparently attends the eggs until they hatch later in the summer.

Abundance: Eastern glass lizards can be quite common in some habitats.

Notes: Glass lizards earned their name by their propensity to "shatter" by breaking their tail, often in several pieces. The common belief that these pieces can rejoin is a myth, although the tail will slowly regrow over a period of months or years.