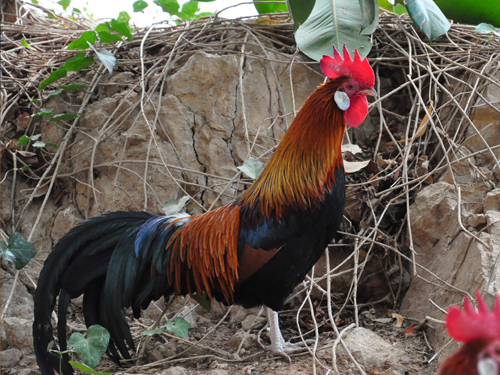 The domestic chicken is the most common bird in the world. In 2003, there were an estimated at 24 billion chickens worldwide, most of them raised for meat and eggs. Some of the fancier varieties, however, are bred for their plumage or for other showy features.

The more than 150 breeds and varieties of domestic chickens known today are thought to have descended from the red jungle fowl of Asia, where they still exist in the wild. Experts think chickens were first domesticated thousands of years ago for cockfighting rather than for food.

Chickens eat a wide variety of foods, including insects, worms, fruit, seeds, acorns, grains, and snails. Their well-developed gizzard (a part of the stomach that contains tiny stones) grinds up their food so they can digest it.