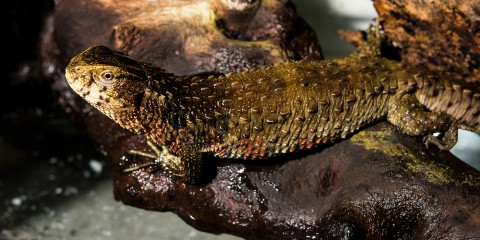 This semiaquatic lizard is found only in China and Vietnam. It is gray-brown with red-orange markings along its throat and sides. Two rigid rows of scales along its tail give this reptile a crocodilian appearance.

Physical Description
The Chinese crocodile lizard is gray-brown with a yellow-tan underside and red-orange markings along its throat and sides, which gradually transition to alternating light and dark bands that extend to the tip of its tail. Hatchlings are deep brown with a lighter, tan head. Two rigid rows of scales extend down this lizard's tail, giving it a crocodilian look.

These reptiles are sexually dimorphic, meaning males and females look different. Males are typically larger and more colorful, with color vibrancy intensifying during the breeding season.

Chinese crocodile lizards are more likely to choose flight over fight. If it is possible to escape, they will jump into the water and use their powerful tail to propel themselves away from a threat. They are able to remain underwater for extended periods of time by regulating their respiratory rate.

However, if caught, they will go into a fit of violent struggle, defecating, hissing and biting to free themselves from a predator's grip.

Native Habitat
Crocodile lizards are native to southern China and Vietnam, where they live in subtropical forests near freshwater ponds and slow-moving streams. They prefer to inhabit areas with dense vegetation, which offers sufficient shelter and protection while resting.

Local extirpation of this species has occurred throughout its range, and populations are severely fragmented in China, with distances of over 10 kilometers (6.2 miles) separating localities.

Food/Eating Habits
This lizard's ability to dive into the water and remain submerged for extended periods of time is useful for escaping predators but also aids in hunting. It primarily eats invertebrates, including snails, tadpoles, insects, worms and larvae. At the Smithsonian's National Zoo, these reptiles are fed crickets, worms and snails.

Social Structure
This species is territorial and, in most cases, only one Chinese crocodile lizard will occupy a given pond or stream.
Reproduction and Development
These lizards reach sexual maturity at about age 3. During the breeding season, which occurs in July and August, the male's color increases in vibrancy. Females give birth to between two and 12 young after a nine month gestation period.

Chinese crocodile lizards are viviparous, giving birth to live young, and the newborn lizards are precocial, meaning they are born in an advanced state and can feed themselves almost immediately after birth. The parents do not care for the young.

Sleep Habits
The Chinese crocodile lizard is diurnal, meaning it is most active during the day. It frequently enters into a metabolic pause, where it remains motionless and unresponsive to stimuli for several hours at a time. This may be to conserve its caloric energy, especially when temperatures drop.

Due to this unique behavior, this reptile is sometimes referred to as the "lizard of great sleepiness" by indigenous people, which has led to the belief that Chinese crocodile lizards have the ability to cure insomnia.

Between November and March, water temperatures dip below 15.5 degrees Celsius (60 degrees Fahrenheit). To withstand these colder months of the year, these lizards go through brumation, a hibernation-like state which allows them to withstand extreme temperatures. During brumation, this otherwise solitary species may congregate together in rock crevices and tree holes.

Lifespan
These lizards can live for 10 or more years in human care, but their lifespan in the wild is unknown.