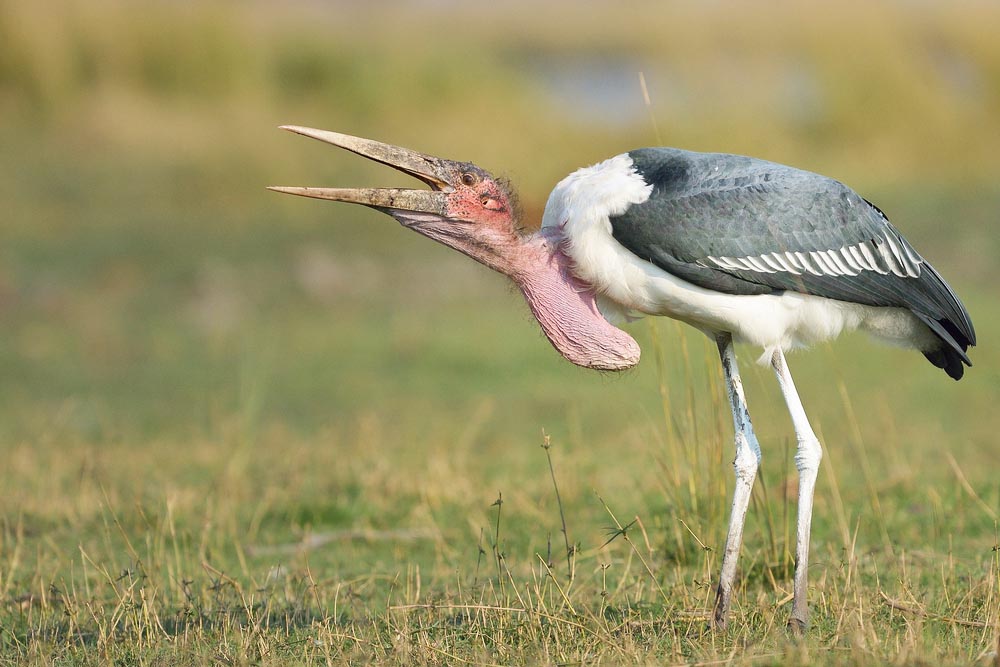 ABOUT
NOT AFRAID OF PEOPLE
Marabou storks live in Africa, from the Sahara desert to South Africa. They live in the savannas and open areas, but will also live close to human habitation.

SUPPER FOR A STORK
These storks will eat carrion (dead animals), fish, reptiles, insects, birds, frogs, and rodents. These birds also eat food scraps around homes, farms, and dumps in African towns. At the zoo they dine on small fish called capelin along with mice.

BALD AND BEAUTIFUL
The marabou stork has no feathers on its neck and head which allows it to stay clean when eating messy foods. It stands on long, grey legs, its upper body and wings are dark grey to black, and its underparts are white. It has a long, reddish pouch hanging from its neck, which is used in courtship rituals. The marabou stork’s orange-red head has black spots that are concentrated towards the forehead and base of the bill, as well as their inflatable throat sac. At the base of the nape there is another air sac which is reddish in color. It is usually hidden by the white ruff that encircles much of the lower neck. The breeding season is the height of this stork’s attractiveness. The white undertail becomes much fluffier to attract a mate. The nape turns a pale blue-green, while the face and forehead become blackish red.

LEFTOVERS, ANYONE?
Marabou storks often gather in groups. They are usually silent birds, but sometimes they grunt or croak using their throat pouch, or they rattle their bills. As a scavenger, it soars over open country searching out vultures that lead it to carrion. When the vultures have torn up a carcass, the marabou steals in to pirate what it can. It will hang around dumps, slaughterhouses, and fishing villages looking for scraps. With its massive bill and elastic stomach, it can swallow a one-pound piece of meat with ease. Despite its size, the bill is sensitive and is used in a hunting technique called groping. With its bill partially open, the marabou dips it in shallow water and starts to wade. When prey is contacted, the bill snaps shut and, with a throw of the head, the marabou swallows its catch. If water visibility is good, it can seize a fish with the bill’s tip. These storks also hang around large mammals, nabbing insects that are stirred up. At grass fires, marabous find insects and small vertebrates flushed out by the flames. Locusts and termite swarms are other attractions.

A POWERFUL FLYER
Though the marabou stork looks heavy when getting airborne, it flies strongly with rhythmic flaps that make a noisy “woofing” on takeoff and landing. A wide wingspan enables it to soar high in the sky. In flight, a partially retracted neck puts some of the bill’s weight on the shoulders. The bill angles down slightly as do the legs, which trail out well beyond the tail.

THE INTIMIDATOR
When a marabou walks about with its throat sac inflated, other marabous take this as a sign of dominance and get out of the way. The sac also acts as a thermoregulator to cool the marabou down. The air sac on the nape also performs this function. The throat sac connects to the left nostril and functions as a resonator to produce a guttural croaking during social displays. This makes up for its lack of a vocal organ. During displays for breeding and nesting, it claps the mandibles together rapidly, called “bill clattering”. This is also done if they feel threatened.

MARABOU MATING
Marabou storks usually mate for life. Known as colonial breeders, they breed during the dry season because the water levels are low and it is easier to catch frogs and fish to feed their young. Marabous start breeding at the age of four, but don’t breed every year and success is fairly low. One egg in three makes it to the fledgling stage. One in four fledglings survives long enough to breed. As breeding time nears, the male establishes a territory. Its throat sac is inflated as a courtship display and a show of dominance and hostility to intruders. A female, seeking a mate, will put on a “balancing display”, her body horizontal, neck extended and bowed downward, wings spread. If she’s persistent enough, the male will accept her and she’ll inflate her pouch, again a sign of dominance to other marabous in the vicinity. The male gathers most of the sticks for a nest, lining it with twigs and green leaves. In towns, they might even use a building. Marabou storks are sure to build their nests within a reasonable flying distance from a food source, and the same sites are used for many years.