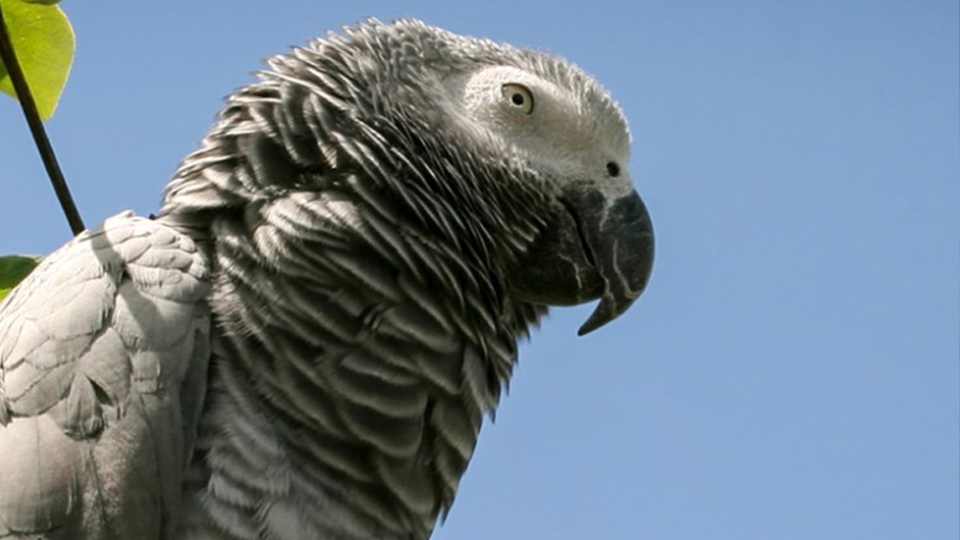 RANGE Central and west Africa from Guinea to Kenya, and Angola. In West Africa, populations of this species often make seasonal moves out of the dry areas in their natural ranges.

HABITAT African gray parrots can be found in lowland rainforests, mountain rainforests, forest edges, plantations, and farms. They will make their nests in tree holes, often finding holes that were previously made by other birds, such as the woodpecker.

Program and General Information
Besides being one of the most popular pet bird species, African Grey Parrots are also one of the most intelligent. In recent years, much research has been done on the mental capacity of African Grey parrots by scientists around the world. The most famous instance of this is the work that Dr. Irene Pepperberg conducted with her famous African Grey, Alex. Using Alex and other African Greys in research trials focusing on communication, she was able to show that not only can African Grey parrots learn an incredible amount of human words, they can learn to use them in context to communicate with their owners. It has been said that these impressive birds have the mental and emotional capacities of a 5-year-old human child.

Common Physical Features
African Gray Parrots are Africa’s largest parrots. The two main subspecies of the bird are the Congo African gray and the Timneh African gray. The Congo, the larger of the two subspecies, can reach up to 33cm, weighing 400g while their shorter relatives generally reach about 30cm and only weigh 320g. Both subspecies are gray in color with white skin around the eyes and a black beak. The Congo has a more cherry red tail while the Timneh’s tail is darker red, or more maroon in color. They are known for their ability to imitate human speech, as well as a variety of other sounds.

Habitat and Global Range
African gray parrots can be found in lowland rainforests, mountain rainforests, forest edges, plantations, and farms, in central and west Africa from Guinea to Kenya, and Angola. In West Africa, populations of this species often make seasonal moves out of the dry areas in their natural ranges. They will make their nests in tree holes, often finding holes that were previously made by other birds, such as the woodpecker.

Behavior and Life Cycle
African gray parrots are monogamous and breeding usually coincides with the dry season. Once paired, these birds have been known to be very affectionate toward their mates. These behaviors include regularly sitting next to each other and frequently preening the feathers of their chosen partner.

African grays make their nests in hollow tree trunks where they lay 2-4 eggs in the bottom of the cavity. The eggs are incubated by the female only, but both parents will feed and care for the chicks. After about 2-3 months the young will leave the nest, but they may still be cared for, for another month.

These parrots are very social and live together in large flocks, especially when roosting. When they’re feeding, a couple birds may act like a sentry to ensure the safety of the flock. They will produce a loud screech to warn the flock of any threats. They are also very vocal in flight.

African gray parrots are incredibly intelligent and are capable of mimicking a large variety of sounds. They very commonly learn to imitate the voice of their owner and can have a large vocabulary of words. Some parrots in captivity may choose to mimic sounds other than human speech such as the ring of a phone or the bark of a dog.

Conservation Messaging
Although they are not currently threatened in their range, the African Gray Parrot is well on its way to a threatened status. Each year thousands of these birds are illegally captured for the pet trade. As pets, these birds have a long lifespan and will often outlive their owners. Rehomed birds can develop behavior issues due to stress such as feather picking or screeching. It is a good idea to know where your bird is from, and to only purchase birds that are captive bred, and not trapped illegally. It is thought that up to 20% of the wild population is taken for the pet trade every year.

Removal of habitat by deforestation also threatens this species of bird. Rainforests are often cut down to make room for crops to be grown. People often consider these birds pests, and will kill them if they threaten their crops. In some areas of their African home range, these birds are still hunted for bush meat.

When becoming a pet owner, do your research. Select animals that have been bred in captivity and not removed from the wild for use in the pet trade. Also remember to choose your pets wisely. You need to make sure any animal you decide to care for fits into your lifestyle. Do not get a pet unless you can adequately provide for their physical and mental well-being for as long as they live.

Supporting rainforest products that are sustainably grown can help to decrease the amount of deforestation being seen in the African gray parrot’s natural home range.